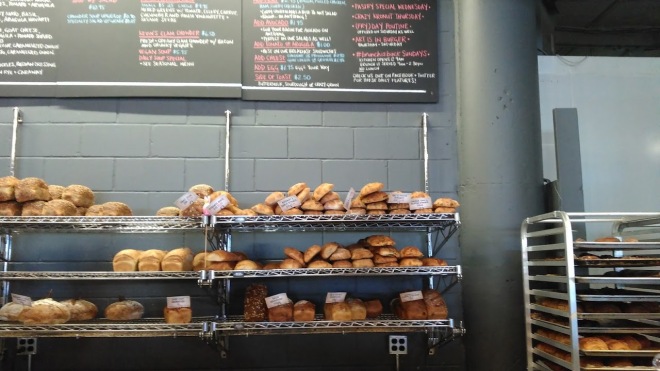 Posted on April 13, 2016February 8, 2017 by Lisa Colas Posted in BakeriesTagged centertown, cronuts, doughnuts, worth it 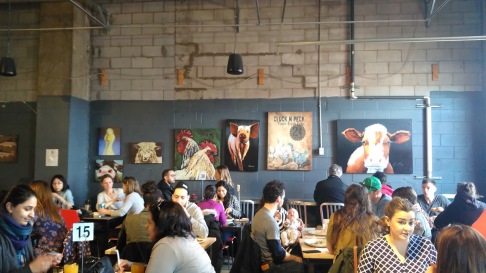 Everyone goes there; if you go on a Saturday or Sunday morning, the eclectic crowd is enough to bring you out of hibernation for the people watching alone. But the reason you’ll really go is for the quality and variety of food available.One of my favourite, favourite places to go eat at in Ottawa.

Art-Is-In describe their establishment as being “inspired by the fine boulangeries of Paris and the Funky cafés of Brooklyn”, and as an “edgy gastro-bakery built to satisfy any craving”. And that’s exactly what it is and does, it satisfies you to your very core. But lets be real, those cravings multiply the day you decide to go try their kronuts, or their croissants, or their donuts, or their pains au chocolat, or…you get the drift. I haven’t tried one thing there, sweet or savoury, that I haven’t loved. 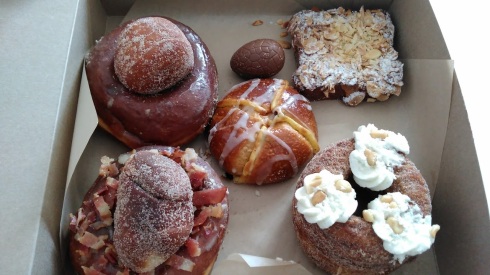 Last time I went, I tried a selection of their viennoiseries: doughnuts (top and bottom left), sticky bun (middle), almond brioche (top right), and kronut (bottom left). Two of them really stood out:

The two doughnuts surprised me the most! I’m a big fan of doughnuts in general, but since I haven’t tried many variants, I was excited to try these! When I try a new sweet, there are two things I pay attention to: the texture, and the taste. Texture wise, these doughnuts were light, airy, and “stretchy”, quite similar to a brioche when you bite into it. And trust me, it’s one of the best textures you can sink your teeth into! This texture comes from the use of yeast in their doughnuts, so it’s not as dense as a cake doughnut, which is leavened with baking powder or soda instead. Taste-wise, the dough didn’t have a strong flavour like I originally thought it would, even with the buttermilk and mashed potatoes used to make it. It didn’t necessarily taste sweet or salty, which left me wondering if it was actually the combination of both that made it so mouthwateringly good! The maple glaze was surprisingly light, and did not overpower the doughnut with sugar. As for the candied maple version, I thought it could have used a bit more sugar for a bolder contrast. For any future yeasty cravings, I would go for the simple maple glaze doughnut.

The legendary marriage of the croissant and the doughnut! Heralded as one of the 25 best inventions of 2013 by Time Magazine, we can thank New York City’s chef Ansel Dominique, for a success that has been imitated worldwide, and which has happily landed in our mouths, here in Ottawa.

Art-Is-In’s version that day was sugared, with peanut butter layers, and was topped with chantilly. Personally, I’ve never been a fan of peanut butter, but the way it was used in this kronut was certainly impressive, and I would definitely get another!

The flavours change often, and Thursdays is “Crazy Kronut Thursdays” with even more flavours.